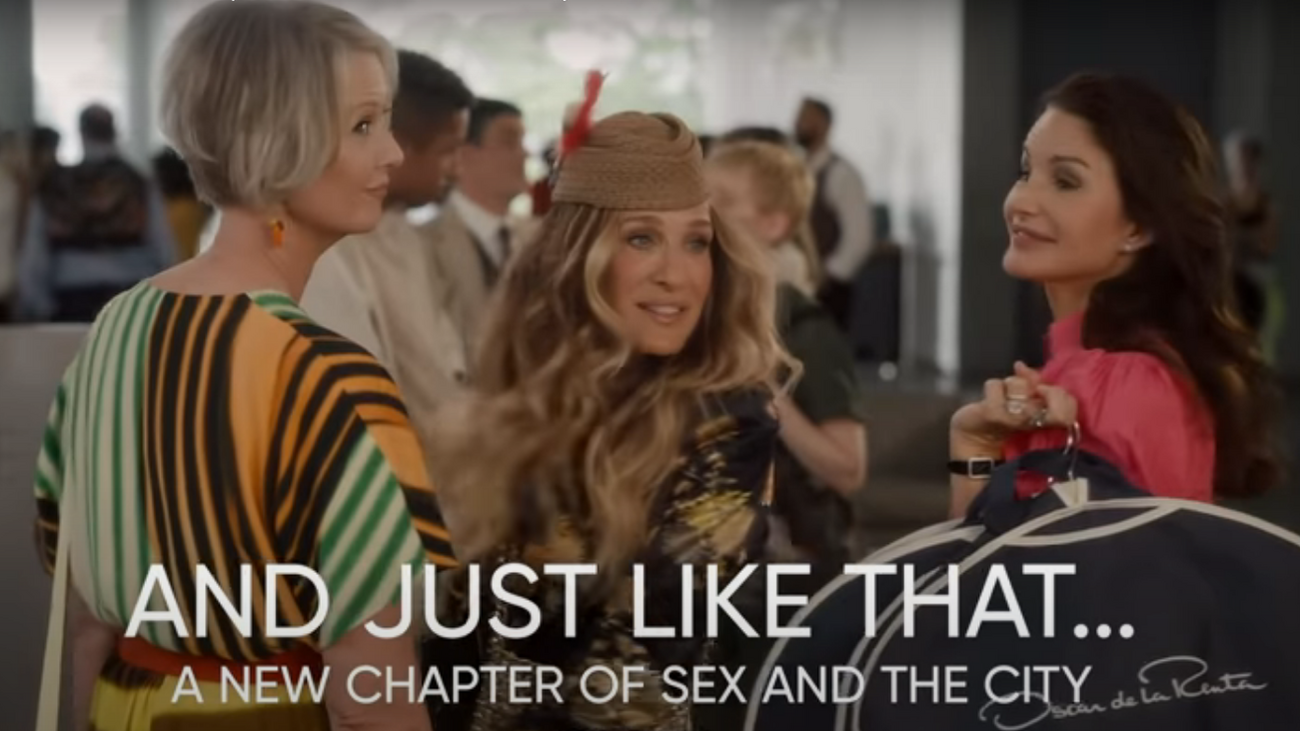 Man, who would have thought that in an episode where Carrie said the word “pussy” and we were treated to the stomach churning sight of John James Preston jagging off that those wouldn’t be the most shocking moments of the premiere of the Sex and the City reboot “And Just Like That.”

Let me tell you how bad those final moments hit me. My intended was on a conference call. My first yell of “CALL THE POLICE” left him slightly startled. Then WHAT ARE YOU DOING BITCH?! scared him. My the time I was full out sobbing he and our trusty dog son were tearing ass to get back to me to make sure I was alright. I was not. To him, I was. But upon hearing the words “and just like that, big died” (or whatever she said that I barely heard thru my sobs) I truly was not okay.

And so this is how the creative team behind a very highly anticipated continuing saga wants to start off – with me, texting one of the writers (humblebrag) how I would murder that entire writers room.

Lets take on this episode with a character by character recap shall we?

Carrie – Gotta say, I didn’t feel a whole lot of character development here, probably because she’s almost in the same situation with first met her in, with a ring from her beloved and larger bag. While not a perfect friend, she’s always been a pretty good one. So good that she misses out on a SCHEDULED departure to go on a weekend jaunt with big to watch charlottes kid in what I am sure will be her one and only piano recital – tho got damn lily played the hell outta that song. She’s always been a bit of a prude, but why join a podcast that you had to know sex was gonna be part of and act scared to talk bout sex after years of having a column called, well, yall know. As for her new “job” it very much gave me cringe. Just seems in place to check alot of boxes, but thats television in this era…..anyhoo, so as lily’s piano crescendos, big’s cycling intensifies and my eyes begin to water. Its clear what’s coming but you hope against it. And when she finally returns home to find him dying but not dead, you still have a bit of hope – til she said what she had said. RIP Mr. Big and RIP Carries wedding choos …..sad, so sad.

Miranda – So this one gave me pause. I don’t give a fuck that Charlotte thinks her gray hair ages Miranda directly, but also Charlotte indirectly, but I do give a fuck that a woman that spent months getting dicked down by Blair Underwood is suddenly very confuzzled by black people. I know getting black dick doesn’t equate to being an ally, but all the unforced errors? I dunno, maybe this is yet another sign of the times….white folks that didn’t see color are starting to see too much color and it blinds them. BUT that notwithstanding, you aint gonna tell me miranda is so damn white that her red assed son is having sex in her house to the point that he’s leaving used condoms on the bedroom floor. And ya daddy not being able to hear don’t get you no sympathy points. I was probably 48 the first time I kissed a man around my mom and I just turned 46. Read that as many times as you need to get it. As we can totally see, Miranda was part of the PussyHat Dolls, spurred by societal injustices to leave her corporate firm to return to school to become a justice warrior, only to find a black assed instructor who aint impressed by her, but will soon become her friend….if the previews are to be believed.

Charlotte – now im writing this bout six days out from the premier, so I cant really remember all that much about Charlotte other than her life seems as perfect as usual. Oh and her youngest daughter Rose is likely Trans, or Bi, or a Lesbian, or just don’t like Oscar de la Renta dresses, but it seems obvious her kids are gonna be her storyline and her fabulous relationship with Nicole Ari Parker. Im rooting for you Charlotte, give me more to write aboutcha!

Samantha – Oh I know she’s gone, but her presence looms large and false. Apparently the biggest author since Stephen King, Carrie Bradshaw, stopped writing books and dropped Samantha as a publicist, a sin so egregious that she cut off her ENTIRE friend group.

was SO ashamed by being fired by her friend that she ran off to London, only to be resurrected in the form of a lone funeral spray bearing her name. NO. NO MAAM. Sirs and madams, NO. I think I read today that she would consider returning in some form….or maybe that was about Bethenny Frankel and the Real Housewives of New York, two developments that would make me very happy.

NEXT TIME WE HAVE A VERY HORRIBLE FUNERAL TO LIVE THRU….