I am lazy.   I have an unquestionable talent.  It’s unquestionable because not one person that I meet in the realm of what I am talented in, will let an opportunity pass without telling me how talented I am.  But I am lazy without question as well.  They also tell me that.  This blog should be full.  Every month should have at least 20 posts in it.  I should blog everyday.  I work in a newsroom.  Im not without source material.  Im on the internet allllllls fucking day.  Im not without source material.  I talk to folks from all walks of life.  Im not without source material.  But, Im lazy….and probably a bit afraid to walk into my destiny or find out everyone has been lying to me.  Along with my laziness, I can also get very distracted.  When I think about sitting down to write something, I inevitably think of  other things I would like to be, which takes me away from the task of writing.   I would like to be, in no particular order….a flight attendant, a writer, an actress, a singer, a comedian, Mrs. Urlacher, Mrs. Long, Mrs. Chadwick, a chef, a focus group moderator, a host, a socialite, a Lotto winner, a mom, a social anarchist, an avenger, a bartender and the woman of the manor on a large plot of land in Cuba where I will wander aimlessly, barefoot in a maxidress, suckling a sugar cane, while  taking sips of my homemade exquisite caipirhinia – fuck.  I can drink that word, but I can never spell it.  Oh well.

So distraction is a problem as far as my personal goals and aspirations is concerned, but thats about the only space in which I am distracted.  Im pretty dope at multitasking.  I planned a boss assed retirement party for mi madre, while going thru a soul crushing breakup.  I was able to care about a family member’s incarceration, while still enjoying Power.  Believe it or not, I wrote said person a letter WHILE I was watching Power. And one time I was talking to said person annnnnnnnnnnnnnnd watching power.  BOOM! POW!  PING!  PEW-PEW!  I sat in the Amy Winehouse documentary and figured out what I was having for dinner.  I wanted our girls brought back whilst hoping for our girls and boys to not be killed in my hometown.  Yeah, Im that deal.   I was participating in my favorite masochistic activity – perusing Facebook – this morning, when I became inspired to write.  This column has been brewing for a while, but the desire became action because of Aubrey, my boy TJ and an idiot friend of his.  Thanks idiot friend*.  You have pushed me into this morning’s destiny.  This fool is one of the ones who sit on high – OWSOH (oh’-sew) is how I will forever refer to them.  (did I just coin a catchword?  Its catchword a word?)  The Owsohs would have you believe you cant pay attention to more than one thing at a time.  That you are as simple of brain as they.  It’s how they get to feel good about themselves and whatever the fuck they care about or stand for….barf.
Exhibit A: 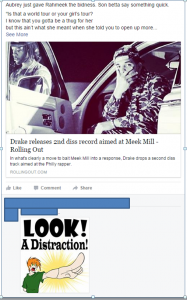 TJ dared to post about Drake now pissing on the grave on the already dead and buried Meek Mills (as you and your cousins like to call him) and one of the Owsoh’s took the time to call “DISTRACTION”.  As the kids say, such a boring and lazy read.  This man, who writes FOR A LIVING, whose job it is to be informed, is – or his fb pals are – being distracted by a fucking rap battle.  Weren’t you able to find this meme and breathe out your mouth at the same time like other idiots?  Im sorry, forgive me, but I aint sorry.  The Owsohs are so condescending, that they deserve my disdain.  An Owsoh told me to dig deeper when I questioned why people persisted with the “Sandra Bland is Dead in her Mugshot” campaign. Which is exactly what I thought she should have done when challenging me.  I think it even more strongly now that we have video of her WALKING INTO THE JAIL, and her mugshots being taken.  This Owsoh, also challenged me on The Cos.  Said he wasnt convicted, so he’s not guilty.  I told her, Zimmerman wasnt convicted in a court of law, but we know he is a murdered.  She told me, “I dont know anything about Zimmerman.”  Owsoh, you oh so….not worth my time.  They tell us we cant pay attention to and comment on pop culture and care that our brothers and sisters are being murdered by the ones sworn to protect us.  They tell us that we should question the timing of Bill Cosby’s legacy tarnishment and not the over 30 years of non-convictable rapes he visited upon young girls.  The homegirl Mama Akila organizes a Chicken Crawl in honor of her most favorite food, but rallied a stunning seek and destroy mission of a woman who dared to insult the dignity of a black woman and her children who were simply enjoying a day at the beach and had the nerve to splash a white woman who was sitting at the water’s edge.  Pretty sure if the Owsoh’s only saw Akilahs posts about chicken, they would call her distracted as well. And then they would be in trouble…..

Im tired kids, tired of black folks dying, black folks crying and other folks lying, annnnnnnnnnnnd Im writing this at <redacted>, with what feels like 100 eyes on me, so Im gonna close this out with this screencap, which perfectly captures my mood, thoughts and fux about Owsohs.

Yes, my beloved Deray….you are magic.  So am I.  Continue to multitask.  Now, Im really gonna go before I forget to post this due to the re-emergence of the Ice Bucket Challenge, cuz yes…thats a thing and a distraction.

*Writers note:  Dear Idiot Friend, if you were being ironic or sarcastic, my bad.  And a million thanks for inspiring me to write this morning.  YOU ROCK MY WORLD YOU KNOW YOU DID, like that chick did MJs!