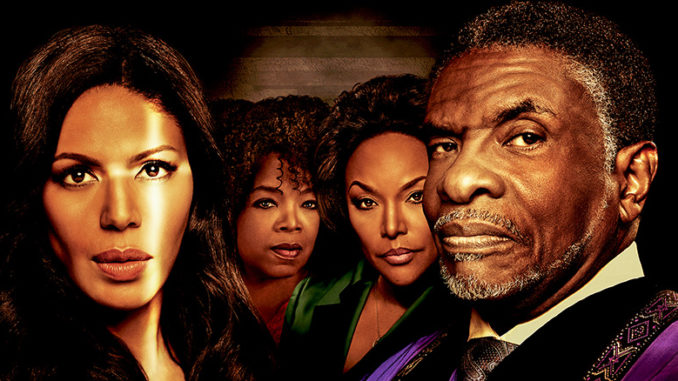 I dont know guys.  I kinda dropped the ball on these recaps, cuz I felt like after a great start the show kinda fizzled out.  After seeing the last three episodes, including the finale which I will attempt to recap – but Im warning you….you are not gonna enjoy this, cuz I didn’t enjoy the show.

The opening found Mac still in jail and being visited by Passa, who must have been an active participant in his daughters molestation and subsequent suicide cuz aint NO WAY I would be visiting the man that actually did violate my child.  Mac wants Passa to be a character witness at an upcoming hearing.  THE NERVE.  Passa is incredulous that this man would even ask, but Mac reminds him, if he remains in jail, he will not be able to pay off Henry – Mac, Mavis and Mae’s dad, to keep THEIR secret a secret.  Im telling you, this has got to be the worst shit in life that Passa and Mac are hiding.  Speaking of Henry…..

….he shows up at the church and Noah stashes him outta Mae’s crosshairs long enough to tell Grace he is on the property and needs to speak with her.  He’s there looking for assistance as his meal ticket is locked up.  GG, shows some sympathy and accompanies Henry to his crib where she discovers enough medicine to, nope….no perscription drug jokes….indicate that he is terminally ill.  He needs to go straight to hospice, which she arranges for on the church’s dime.  Before he checks in and begins his final descent, Henry does manage to tell Grace that Passa and Mac’s first church burned down under suspicious circumstances decades ago. I guess Henry is safe and quiet for now…..

…..which is more than we can say for Kevin.  Now that he outed himself to Charity, which you would have known had I bothered to recap, he wont stay quiet, altho he has found a safe space with his wife.  Charity sings a lovely song in church because, Winans, which seems to indicate she is gonna stand by her man after nearly pummeling him to death and putting her unborn children in jeopardy in a previous ep, that you would have known about had I bother to recap.  I digress….he still aint welcome in her bed and when he goes to her, his sad little “gay de-programming” book in hand begging for another chance, she shows the backbone we’ve been wanting her to show more and more of.  She immediately tells him it aint happening, but softens a bit when he begs….still, she wants a break, he has to go.  He understands…..

…but who doesnt understand is Jacob, the Rodney Dangerfield of Memphis.  He doesnt understand, or pretends not to, why his new boss, his dad’s rival, the pastor of Triumph, Bacie Skanks (what a freaking name) wants to build a $40 million christian community center right across the street from Calvary. Um, Short Bus, let me help you out.  He hates your dad.  It’s really not that hard.  What has to be harder for you to comprehend is why, after all his mind fuckery of you, him tearing you down, building you back up, encouraging you to step out on faith, even if that means going against the family business, why your dad is now all like “Gotcha! You thought I was really sending you to work for Bacie?  My only son and my enemy?  You my eyes and ears over there boy!  Tell me everything he does.  GREENLEAF TO THE WORLD BLOW!!” Well that could be cuz, while he doesnt hate you, he def doesnt respect you and you would have never known that if you didnt step back in Calvary….

…to support your family and watch GG preach.  Yes, the girl wonder prodigy preaching machine is back in the pulpit.  GG agrees to not return to Phoenix for the summer to fight Ray for custody of the dearly departing Sophia.  She decides to stay in the family fold and preach for her dad, once he reveals to her that he has Parkinson’s disease.  I gotta tell you, unless Im misremembering, this is the first time we’ve seen GG preach, and it was extremely light-skinned.  I’ve felt more energized by State of the Union addresses and the lectures I heard in my Macro-econ class the third time I took it and finally passed..thank you very much.  She got up there and spoke frankly bout Mac and his rapey ways and they had a moment of silence for the victims.  I guess.  Hopefully im wrong and she preached before and they didnt save this medocrity for the finale.  Her sermon is so boring, she must have needed a drink to revive herself…..

…and where better to get a cocktail than Mavis’s place…which is gearing up for a permanent last call.  Mac, presumably has made good on his threat to have her land appropriated and she is going out of business.  Grace stops by and Mavis reassures her she did the right thing by airing Mac out.  She warns Grace about staying close to the family and tells her what type of man Passa USED to be.  I swear for a minute I thought she was gonna reveal she used to sing “as we lay” to Passa on karaoke nights and she was GG’s real momma….but nah..just a cautionary tale.  Later, Lady Mae shows up at Mavis’s place and I grabbed my long stem Pope Wine Glass and flamed up my <redacted> prepared to watch these two tear up my screen…..turns out I was the one to tear up my screen when I threw my wine glass at it in protest.  BOOOOOOOOOOOOOOOOOOORING. They literally stood there and told each other how the other was to blame for what was happening in the family.  Great.  Knew yall felt that way going into it.   Thanks ladies…you can pick up your gift baskets on the way out……

Also on the way out is Sophia…her dad is out front coming to get her and take her back to Phoenix.  Sad goodbye, sad goodbye.  Hug hug kiss kiss.  Drive off.  Bible verse voiceover.  Ma-KEE-Dah-Dah.  See ya next season Sofie.  But she aint the only one outtie….also outtie is Mac, who arrives freshly free from jail and suited and booted along with police cars, sirens wailing.  Both the police and Mac ascend Greenleaf steps, with Passa peering out the curtains knowing his secret is no longer safe and his day of reckoning has arrived.  Apparently, having unsubstantied information about an old arson is enough to clear you from charges of molesting young girls for decades.

Okay guys…thats all I got…..Greenleaf has been renewed for a second season which will premiere next summer.  See you then……