So Why Aren’t You Watching Gomorrah? 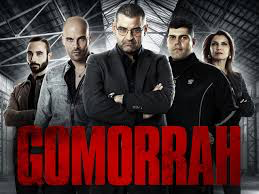 I watch a lot of television. Its true. Yall know it. Its right there in the about me box over to your right. And this pandemic has turned me into a couch potato EXTRAORDINAIRE. I’ve seen so much shit, its all melding together. Shows with angsty white teens and their drama are indistinguishable. Shows with strong black women leads got me confused over whether they showcased the talents of Viola or Olivia. Did the girl kill herself or her friend and did they set it up or was her bestie really dead at the hands of her teenaged neighbor all them years ago? Why did that man let them crazy assed girls up in his house all damn night? These are the things that mock my reefah addled memory. But one show over this whole staycation from hell has remained at the front of my mind and that my friends, is one of the greatest shows on earth (not hyperbole), Gomorrah.

Gomorrah is an Italian based and produced series that combines all the best elements of Breaking Bad, The Wire and The Sopranos. MYA! That cannot be possible. I hear yall….when I read the synopsis, I was too, like you dear reader, Incredulous. How on earth could anything be better than the aforementioned serials, upon which Ivy League level courses have been created. Well pull up a seat and Ill tell you.

Gomorrah is the story of a crime family in Naples, The Savastranos, led by dead ass serious Don Pietro, his “Carmela could never” assed wife, Lady Imma, their neer-do-well son, Genny and Don P’s protege, Ciro. They oversee a criminal empire in their ultra violent northern hood, Secondigliano. With shifting alliances and zero pledges of sincere loyalty, the family struggles to maintain their hold on their empire from forces within and outside of the clan.

Well MYA, if the show is so great, why haven’t we heard of it? Good question. In production since 2016 and available to watch the same year, I’d say the reason you haven’t heard of it is because you live in a shithole country. There have been 4 seasons and a prequel/sequel movie that were available first in the US on The Sundance Channel, then moving over to Netflix, before landing on HBOMax. But negotiations between Sky Italia and THE WEINSTEIN CO…..do I need to say anymore? Well thank ye Gods that it all worked out in the end because all 4 seasons, the movie and the supposed fifth and final season will all be available for us third world residents of this banana republic! The ratings for the Italian debut of season 4 slammed the debut of season 7 of Game of Thrones in Italy and the true crime book on which it is based, was so true to life, the author has been in hiding and the mayor of Naples says crime spikes in his city every time the show is aired.

Now listen. Even though I’ve compared this show to some heavy hitters in the drama category, there are some stark differences. Don’t look for no moments of levity. Aint no pizzas on the roof. No Paulie Walnuts losing his shoes in the Pine Barrens. No McNulty/Bunk bromance moments. I was thinking back on it and I don’t think I saw anyone smile at anyone else in the entire shebang. This is straight up MOB ACTION. Ya sister can get it. Ya mama can get it. Ya cat can get it. Ya son can get it. Anyone can get it at anytime. This is Ned’s head on a stake EVERY DAMN EPISODE. You won’t necessarily cheer for or root for anyone cuz they are all so awful….although I do have a favorite. Those that know me will know who it is, even if its not apparent initially, but let me disess, cuz I’ve said too much.

Lets do some light comparison.

Don P, as he is affectionately known is a humorless hardass of a mob boss, who won’t be sitting down in a shrinks chair to figure out why his mother didn’t love him. If what I know of this mofo is true, he’s more likely to have killed his mother than to beg for her love. He has the violent temperament of Tony coupled with the no nonsense-ness of Gus Fring. He loves his wife and his son and his hood and his power but dassit.

Lady Imma is what Carmela could have been if her husband looked at her as an equal, not a rib. She is cold, cunning, smart and commands the respect of her husband, and the begrudging respect of his generals. While she is a fierce mama bear, you won’t find her baking no cookies for the bake sale or cozying up to a unavailable priest, she got bodies to catch!

He even looks like one of the cousins! This man Ciro Di Marzio is a fucking killer. He is loyal to Don P, to a fucking fault. He is a brother to silly assed Genny. He is respectful to Lady Imma. But he is 100% out for self. He has the best part of Stringer…smart and future minded, but sometimes finds himself cuffed to the ways of yore due to the old school stylings of his boss. Nicknamed “The Immortal” because he survives the unsurvivable, this is one capo you don’t wanna “piss” off. Thats for yall that have seen this masterpiece.

if you liked, and lets be honest you didn’t…..

then maybe you will also dislike,

The lone heir to the Savastano Crime Family, Genarro Genny Savastano, will tap dance over every last nerve you have. I mean you will hate this grown boy the way we all hated AJ. He wants to be in the mix, begging his dad to let him go out and play but we learn early on why that plan is on pause. Spoiled by his parents, but determined to become a force, keep an eye on Genny.

They got projects in Italy, yall! The Towers aint got shit on Secondigiliano! These residents are literally prisoners in their own homes. The “blue tops” “yellow top” screams of the towers are replaced with choppas sanging and flower brangning in Naples. Literally all you hear all day long is the roar of motorbikes and machine guns.

So thats the primer guys….there are a bunch of secondary characters, gangs, bosses, dons, wives and such, but I can only keep yalls attention for a couple minutes. If you wanna watch with me, again, Im thinking im gonna recap this, cuz its really that freaking good. The first three seasons are available on HBOMax now…with the fourth season and the movie coming later this year. Season 5 is in production now, so we got some time to get it all in!