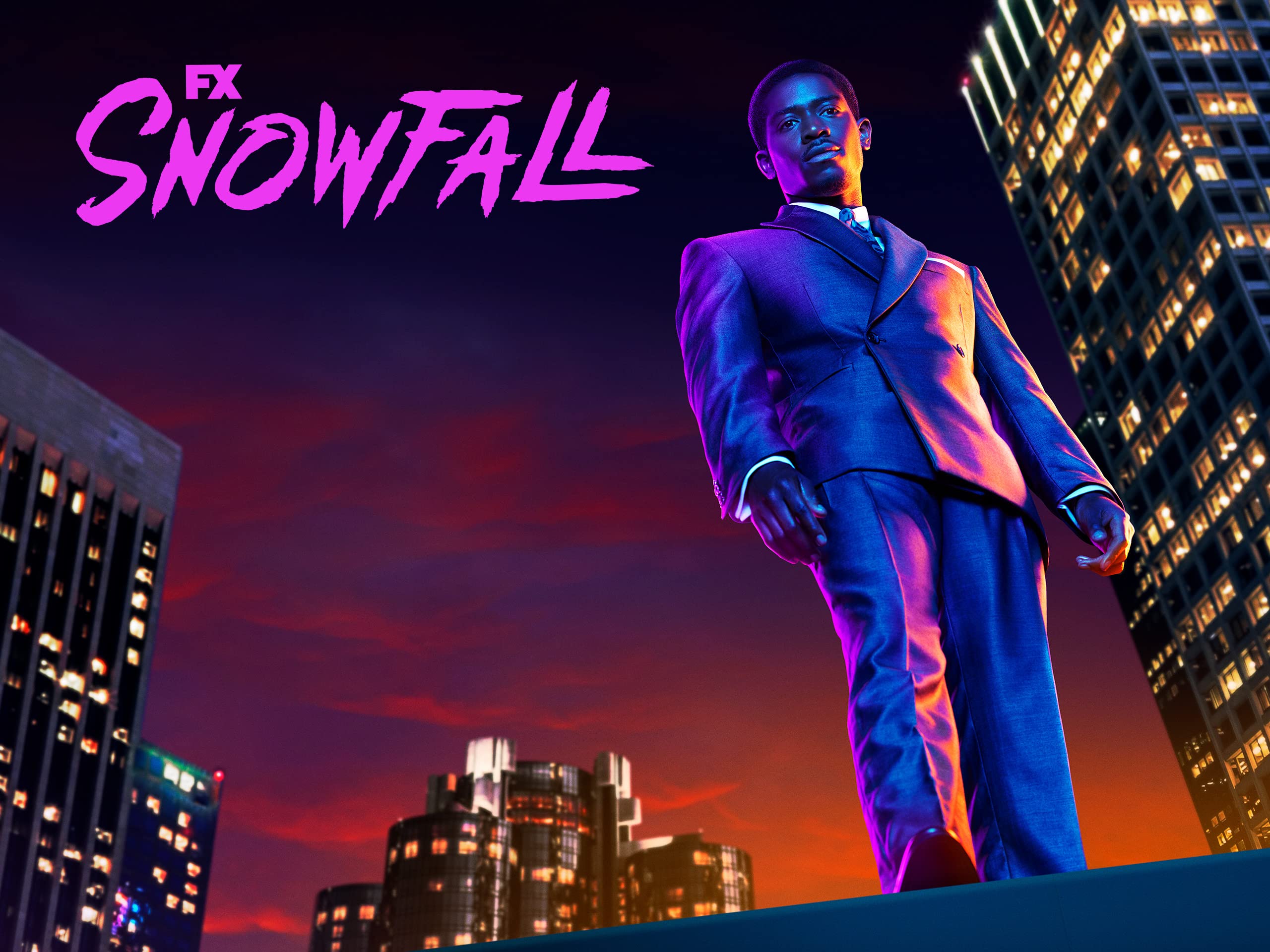 Hello again, goys and birls. Remember me? The one that said she was going to write consistently about Snowfall? Well I fucked that up, but its not entirely my fault. Well it is, but its only because I was mad about:

So I was not a good steward of this penultimate season, but after last night’s finale, I felt compelled to write.

Forreal, every couple of seconds once I heard the phrase “73 million dollars” my mouth dropped open. I legit could not breathe once “In the Air Tonight” came on til Andre Young told me how I was bout to witness the strength of street knowledge. BRAVISSIMA!

This last ep and the one that preceded it were so fucking good it made up for the middle part of the season, which admittedly wasnt my favorite. One of the co-creators said he wanted to focus on character development, so that when the last and finale season airs, folks wont be all “daenarys wouldnt change that quickly” aka the rise of Louie. But baaaaaaaaaaaaaaybeeeeeee, that next to last ep, when Queen of the South Central LA told The Saint that she went to Teddy Reed and it wasnt no hard feelings bout it, when we all knew the hard feelings would be present the rest of this ride we on. But not only because she iced The Saint out the game, but also because she went rogue and took out a hit on Kane, that went horribly wrong. Kane lost a soldier, but not his own life which means he will live to see another day to avenge this attempted murder. Speaking of horribly wrong, I dont know if having a coked out former cop on your team is the best, but it worked out for Louie last night.

Let’s see where everyone is as of this morning:

UNC: Blissfully loved up, if no longer LSDfully loved up – shouts out to Skully for just getting them all high instead of killing them. Thanks Skulls! – Anyway, Unc is full of love for his community (for a hot second), for his money and for the love of his life Louie. Seems like at this point all he wants is whatever Louie wants, which in my mind, means he’s gonna die – especially if he is based on Daff. Sorry Unc.

Leon and Wanda: Sin and Tboz done went off to Africa, yall! Wanda off the rock and so is Leon. Im reminded of Shawn Corey Carter’s magnum opus “Allure” where he talks about the addiction to selling drugs as well as the addiction to taking them. They both were in love with it in different ways and we all saw them taking steps to leave it behind them. Luhlee was a boy in season one that had never seen the ocean and is now trying to minister to the hood about minimum sentencing guidelines and midterm elections. GROWTH. And Ms. Wanda fought off the drugs and became so successful at recovery that she took residence in the Saint home and in his business, before taking a leave of absence to accompany Luhlee to Africa. I wish these two kids the best, although a return to South Central seems likely.

Veroniqughhhhhhhhhhhh: okay so she’s pretty smart and seems like the perfect person for the Saint if not too similiar in looks to his mother, which gross, but….she’s in his corner unlike Manboy’s girl Tallahasseniqua or whoever. She’s got a law degree, some shady shit in her background and was ready to go to war with her baby daddy. Also she still has his bun in her oven. Interested to see what long lost person she connected with over the phone, who she thinks will be of help to our, I mean her man.

AVI DREXLER: Rest in all the muthafuckin Peace, my guy. I think we knew from ep 9 that Avi wasnt long for this world and he probably did too. From the time he wanted to shoot Franklin in the chest for daring to try to enter his world, I loved Avi. Even when he tried to rob the Saint, I still loved him cuz the Saint did too. Avi was always there for Franklin with some sage financial advice or an uzi, didnt matter. While I hate the way he got played in the end, at least it will bring some heat down on Teddy Reed, who I officially hate now.

Teddy Reed: man lissen, I barely know whats going on with this guy when Im watching the show, but I do know he’s a motherfucker. After cutting Franklin off and then shaking Franklin’s hand as he tendered his resignation, he steals all of Franklin’s money! SEVENTY THREE MILL, man fuck it, I cant even type that shit. I wanted to projectile vomit when I heard the amount that he stole. Then because Oso aint wanna do whatever the hell Teddy wanted him to do, he sicced the DEA on Oso, who aint never did nuffin to nobody! That shit pissed me off….Teddy Reed gotta go….to wherever Martin sent Parissa. When we left him, he was in trouble and trying to get the CIA back on his team.

Oso: in jail as of this morning. Locked up by a hateful, vengeful DEA agent. Turned in by Teddy Reed’s bitch ass. He was on his way to happily ever after with ol girl who just showed up and her kids. But noooooooooooooo, and Franklin tried to warn him, but Oso wanted no parts of double crossing the not still employed by the government Teddy. And look what happened….threw the last bag of money in his truck and the DEA rolled up. I hate this. HATE THIS.

Louie: Gave the Saint the kiss of death at her wedding. Went to Teddy Reed behind his back to cut him out the game and then OFFERED to give him a territory her ass wouldnt have without him. BISH WHET?! Someone once told me that only rich people could be greedy and I didnt get it, but Louie has crystallized that sentiment perfectly for me. She got Bunky or Dunky or whatever his name is, the Rampart cop on her team now and smartly brought him to her meet with The Saint who told her he’d kill her 10 times to get to his money. She let Franklin off the hook and directed Rampart to let him live but told him in no uncertain terms, they were done and if she saw The Saint again, she’d kill him. And I believe Griselda.

Cissy Saint: after confusing us with her motivations all season, her plan was revealed. She went down to Cuba and made friends with the KG..yall fill in the blank cuz I dont want nobody on my ass talmbout Im being friendly with an enemy combatant. So her cuban/russ- wont finish that either – got his hands on Avi, killed Teddy Reed’s girlfriend and now is finna hook up with The Saint to take out public enemy #1. CANT WAIT.

The Saint: he has made me believe I can do all things as long as Phil Collins “In the Air Tonight” is behind me. He starts off the ep in the worst position possible: bruised and broken and BROKE. He not only is broke as he assesses he’s in DEBT. The drugs that he sells and the conditions that they cause have rendered his south central properties worthless. He’s days away from losing the 6 million dollar deposit on his downtown property. He goes to try and smooth things over with Teddy who tells him go buy his shit from Louie. He tries to enlist Oso (see above). He resorts to Louie, who (also see above). He’s literally the worst type of adversary, a mad dog with no options. So he does what any enterprising young lad would do. He robs louie and jerome. LOL! I got so amped to see him and his homegirl crew, blasting fools and running up on keys and money and money and keys – oh my! Next stop is to Kane’s hospital bed to tell him Louie took the hit out on him. The next day he’s met by Cissy, who asks how he is gonna fix it and that famous Saint Yell is heard for miles around. He tried to fix it and family fucked him so now everyone gets what they get. He’s coldly sorry to his mama and tells her what he is aint her fault, but the gloves are off. Mama turns to him with an offer he cant refuse and now its go time. #TEAMSAINT

So yall know I will definitely be back next season for what is SURE to be a wild ride. Only 10 (probably) episodes to put a bow on this magnum opus which we know aint gonna be about rainbows and sunflowers.

SEE YALL WHEN I SEE YALL!