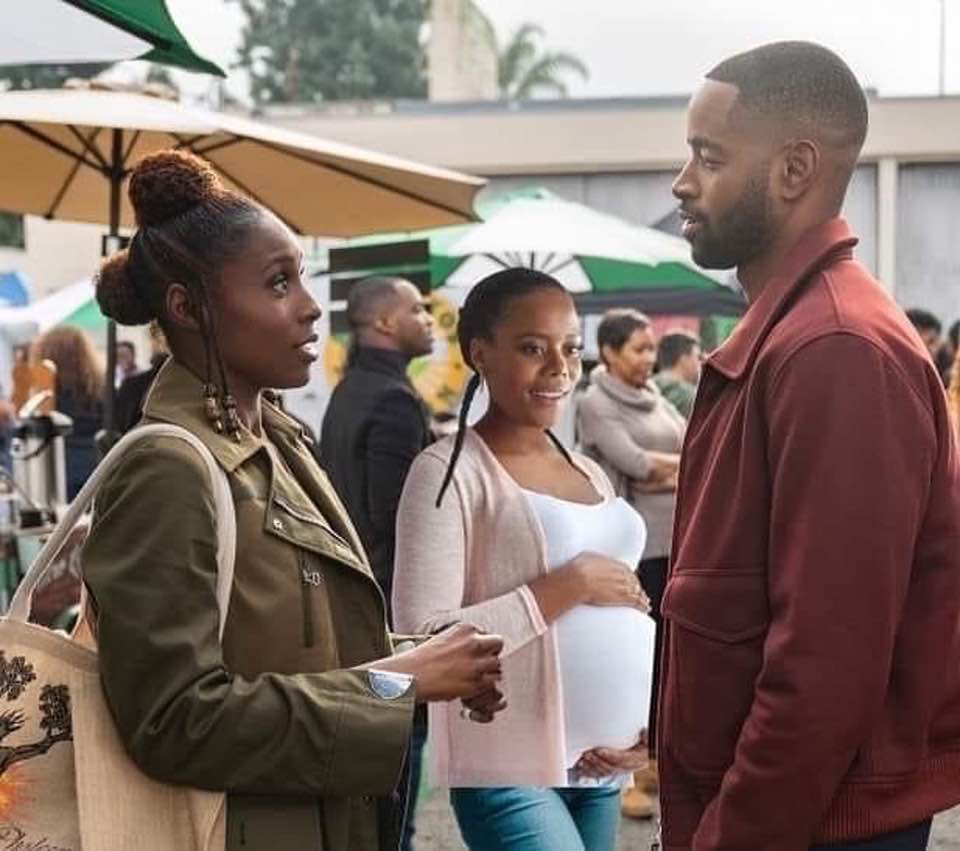 YEP!  HERE I AM, FROM MY COMFY ARMCHAIR!  GREETINGS AND SALUTATIONS BITCH!

Now, when I first arrived at Insecure Season 4, I sat down with my reefah and my notepad and pen ready to take notes and recap the season for you. But from the moment Issa told an unknown-til-later Nathan, that she didn’t really fuck with Molly anymore, I felt this season would be different for me personally.  You see, two of my oldest friends and I aint really fucking with each other right now and I wanted to experience this journey in the purest means possible.  No notes, no recaps, no echo chambers, just a straight hit.

So imagine my dismay at whatever in the Name of The Game fuckshit Prentice Perry, show writer, director and producer of Insecure, dumped in my lap last night.

Oh Insecure Finale, how did I hate you….let me count the ways.

Where do I start?  HMMM how bout just off the top of my head, in no order of true significance.

Firstly, that scene with the cops? What the fuck was that?  A tip of the hat to current events? A sly ‘not all cops are bad” move? It felt weird as fuck in the middle of what was happening.  Plus didn’t we do the whole cool cops shit a couple of seasons ago? When the cop pulled Lawrence over and then let him go as they bonded and ki-ki’ed over college rivalry? Is this a cop propaganda show?  I get enough of that from the internet and its bounty of cops hugging lil black kids/nakers doing the line dance du jour with the boys in blue. Now’s not the time…stand down.

Secondly – this show and its depiction of mental illness, while laudable, needs some work.  Nathan’s clinical diagnosis was just a one or two line off and although the bread crumbs off Tiffany’s post partum issues were left out for us to follow, I don’t think it was covered to the degree of time that the FUCKING FINALE dedicated to it.  Like SERIOUSLY, we had so many issues to follow up that dedicating 20 minutes of a fucking 30 minute show was a fucking no. And how many of us wanted someone to come from behind that door behind towel clad Tiffany.*

*An Aside a last night Penny was on Twitter stating how Derrick was def the daddy of Tifs baby. Does anyone remember when they were watching the finale of the slave show and derrick said tif was at Issas, when she clearly wasnt? Why dey do dat huh? If it wasn’t important why throw that our there?

so yeah, I wanted tif to be having an affair, if they wanna blow up anybody’s relationship, blow up dat one…NOT ISSA AND LAWRENCE.

I will not suffer thru the indignity of y’all trying to make me relive Melanie/Derwin/Janay.  That dynamic destroyed a show I loved and I will not watch you take you from me.

Why would they do this? How fucking lazy a trope is the baby daddy shit? Why saddle Lawrence with that moniker? And to all the father’s getting their tighty whities in a bunch, im not talking bout you and your great parenting, okay? Im pretty sure Lawrence would make an amazing dad like each and every man reading this right now but why use it to introduce conflict into his newly re-formed relationship with Issa? Couldn’t the distance have accomplished the same?  And again, didn’t The Game do this same shit? No one wants and nobody asked for no got damned break baby! Some of us have lived this, watched our friends go thru this, or know somebody who has.  When folks say they l like to see themselves on screen, I doubt this is the experience most of us want to relive.

The bus shit was dumb.  Why the fuck would they have been on the bus? Even Issa, as the “broke” friend has a car. Nothing that happened on the bus was funny and Dereks friendship speech that was meant to telegraph Issa and Molly fell flat for me. All the overt knowing glances Man miss me with that. And im not even gonna address that button shit.

Nathan and the shop? Don’t get me wrong…I like ol social justice warrior in real life Nathan and I find his presence sooting on the show, but again, in a finale, what the fuck was that stop in the barbershop for? Nathan had already told her how he felt and she told him how she felt ONE EPISODE ago, so why we need to see the very small back room of his shop where, she’s….gonna have an event? Or was that the meeting space about the event? Lets go with the latter over the former in the interest of my mind not totally exploding.

Molly’s situation with Andrew was satisfying….if he walked it out on her.  Molly’s a trash person – I implore you to watch the show again if you disagree, and after watching if you still disagree, hit me up and Ill remind you how she fucking igged the fuck out of her father for having an affair while she was having one – and she’s displayed zero growth since she Toni Childs’ed her ass up on this show.  Getting a new job aint growth fam.  Finding a purpose, as Issa has, is. Molly is super selfish. That shit with Andrew’s family was so overwrought. He shoulda left her in Mexico. And he certainly should have left her after she denied his brother the opportunity to apologize.  I hope to fuck he left her ass….which leaves her….

Caling up Issa….girl gone.  These two are the epitome of the type of relationships that form from long term friendships. Trauma bonds what they call’em.  They love the bond they have between them if not each other.  They love the familiarity, the comfort, the old roles, the old jokes, the remembrances of the days of yore….what will be interesting to see is how long they can sustain as they continue to mature…..just ask my two oldest friends.