This week, we see yet another cautionary tale bout messin with YT womins…..but later for that.  I wanna talk about the true star of this episode: Kelly.

Oh sweetie.  Soon as I saw them two YT womins I knew what time it was.  How you ain’t know is beyond me. What I do know is that when white people start buying drinks, you stick around, NOT run out the store to get to your BOYS crib?  Geez Dum-dum.  I also knew, that type of action is beyond you. You are NOT built for that life.  Soon as they talked bout LeMarcus the first time, you shoulda pulled a hit and run.  But nope. You stayed – and got some karmic retribution for how you treated Tasha in the form of a limp dick and a quick dismissal for some takeout.  LOL.  And then….then…with your dick and ego decidedly in the dust you go to the one safe space for you.  Sittin outside your former abode where so much love lived….til you fake pumped and called ya girl home to talk only to be found chopping down a bust-it.  You a fan of fake pumps, ain’t you, ‘Rence.  You fool.

P.S.  So many of your ardent supporters were so quiet post-show, when they been SO loud.  You should really check on them and make sure they are still alive to hate black women.

GIRRRRRRRRRRRRRRRRRRRRRRRRRRRRRRRRRL, you is in DANGER.  Now look, I done had a dalliance with a light skin with personality and MA’AM – that shit can be trouble – especially when it’s in an open marriage with one of your girls. (That’s your story, not MINE!) Because we are Myolly, soon as I heard “chicken fingers” I knew – I KNEW.  This stomach of ours leads to more bullshit than a little bit. So you done had some chicken fingers. Now you dranking.  Then you dancing.  Then you twerking.  Then you listening to that deep ass voice tell you how an open marriage aint work for him and ya girl.  Now you thinking.  DONT BITE THE APPLE EVE.  See this type of shit is fine for a certain type of person, but that aint us right now. That’s not where we are.  Plus – these aint random people – these are people with whom you and Issa have some sort of longstanding relationship.  Wifey may be cool with an open marriage, but I don’t know many women that want their husband sleeping with a mutual friend.  He fine tho – that Al B. shit notwithstanding…just dont do it.  Good girl sending that “thanks, but no thanks” text…wait, you DID hit send, right?!  Call me, girl.

I’m bout to start calling you Timex, mama, cuz you keeps a licking and keeps on ticking.  Growing up as an assless black girl, I’m used to a certain level of disdain and dismissiveness from black men, but I ain’t NEVAH EVAH withstood the “FINISH HIM” level of annihilation you suffered at the hands of Folix, I mean Felix.  From your hair to your voice – this nigga had zero mercy.  I’m not even sure how I would have processed that.  But there you were…still standing and walking away with strangers going thataway. Oh GOD and then your Living Single rendition.  I was watching with my girls and no one laughed cuz we were just so embarrassed for you.  Then Daniel stood there not giving a fuck while you were worried about dealing with some drama…jokes on you again my dude.  But you rebounded nicely – sitting next to two fools engaged in digital sex, you and Daniel found a way to connect, hopefully not for the last time.

Editor’s Note: Issa and crew have heard the outcry about the apparent lack of safe sex and have responded. Apparently condoms are included in scenes, but they are not obvious enough for the masses.  She promises to do better.  Now y’all can go back to making sure all the non black shows y’all watch are doing the same. 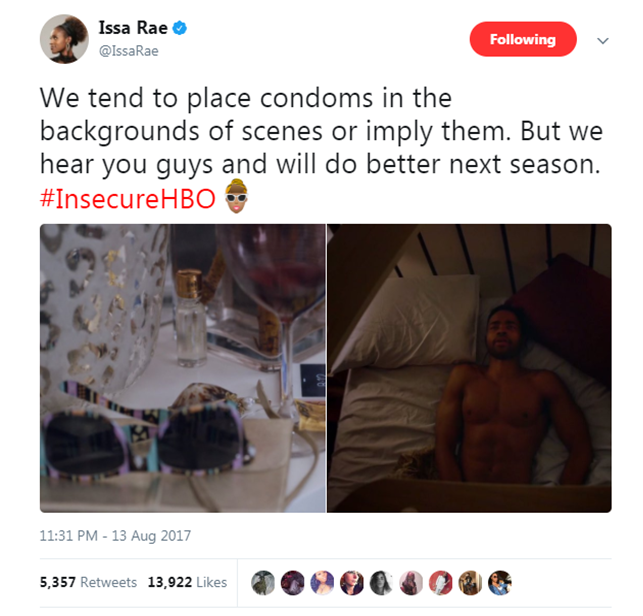