Before I Gave Kendu, The Remix

My outrage couldn’t let me just repost my original piece, as was my first inclination.  I had to update this, cuz this ape faced muthafucka wants an additional THIRTY FIVE THOUSAND DOLLARS PER MONTH from our Queen.  This trash heap originally requested $129,319, but only – ONLY – got $30k, after destroying his marriage by fucking a woman he brought into his wife’s professional and personal life, but what’s a little betrayal when you have bananas to buy? This nigger, cuz ignorant, claims that she has $275,476 a month just laying around that she can pay him in the form of spousal support.  Why does he think he is entitled to more of her money? Because this cancer, the disease, not the sign, claims he cannot find work since Mary has slandered him in interviews and her music, which is usually happy, but is only sad because she is getting divorced.  His claim is not totally without merit.  In a September interview Mary had said:

“I thought someone loved me, right? Turns out, he was a con artist and he didn’t, and now he’s coming after me for all my money,” she said while promoting her film Mudbound. “When you come out of something like that, you realize you were never the one. There was someone else that was his queen. I got played. I got suckered. I have to keep smiling and keep my spirits up because this is designed to kill me.”

WHERE IS THE LIE?

Raise your hand if you heard of Kendu Isaacs prior to him marrying her.  Raise your hand if you knew what J-O-B  Kendu had prior to her.  Raise your hand if you know that on his watch Mary did an ill advised Burger King commercial or that she sang an awkward hymn in front of Hillary Rodham Clinton that embarassed all the saints and ancestors.  Perhaps THOSE are among the reasons that you cannot find work, you diseased rhinoceras pizzle.  Im sitting up here wondering why he can’t make no money offa his slutheffa Starshell aka WE WILL NEVER BUY YOUR MUSIC CUZ YOU CAME FOR THE QUEEN.  Probably because he knows we will never buy her music cuz she came for the queen.  It takes a special kind of low life human form of herpes to ingratiate your hoe to your wife.  And it takes a special kind of fucking moron to mess up your meal ticket when you aint got shit else.

But I do know, that he signed a pre-nup, which should be a non-contestable, iron-clad, document regardless of what genitalia the signers possess.

And another thing I know, is that there are many, some may even say, myriad things that I would do #BeforeIGaveKendu, one thin dime of money outside of what we agreed to prior to marrying – here those things are, in no particular order. 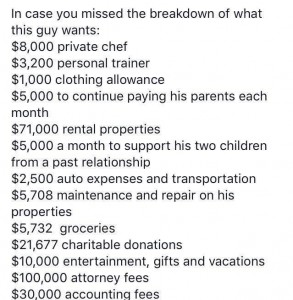 By no means is this list exhaustive, just a reference point for how a man, who had a career – allegedly- before we met, I went on to hire, kept on after we married, and showed his gratitude by letting his hoe lay up in his wife’s house, wouldn’t get one dime over what we agreed to prior to marrying.

What would you give all your money to before his fugly ass?  Hit them comments!