We Need to Talk About Safaree 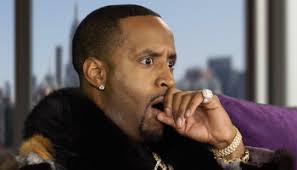 Only something as big and massive as Safaree’s dick could jolt me out of my horror induced sabbatical from Myalogy.  And jolt me that muthafucka did.

Late last week Safaree Samuels, heretofore known as Nicki Minaj’s ex, had his privacy intruded in such a way that mouths were left literally gaping open – LITERALLY.  Some nudes leaked of fam, and from an idealistic perspective he did NOT disappoint.  That thang was long and strong, wasn’t it, Ladies?  That pic spread like wildfire through social media, blogs, gossip sites and my secret text group.

A sampling of responses, if you will:

“Holy Mother of Mary and Joseph all and the Folks in Wakanda!”

“That thang is a MONSTA. A motherfucking MONSTA to be exact.”

“I’d be up for that challenge right there!”

As I sat that day and watched all those responses roll in, I was confused.

I looked at that picture and saw nothing but pain.  Saw my head ramming into a headboard.  Saw tears streaming out of my face.  Pain.  Pure unadulterated pain. “These bitches must not have low cervixes,” I thought to myself.

While I am not a fan of micro-penises, I do not need anything approaching this size in my life.  I know this because one day after a particularly spirited time of rear entry, I found myself sitting on a baby nursing pillow, determined to get to the bottom – im funny – of this pain.  I went to the google and entered “Why does it hurt when…” and swear to black jesus and mbaku, “…I get hit from the back” popped up.

“WHY DOES IT HURT WHEN I GET HIT FROM THE BACK?”

Thats when I knew.  Women be lying about sex….to each other.  We will google our private pleasures and pains, but we wont talk to our girls about it, lest we not be seen as a freak or sexually liberated. Folks be wanting to come off like the next coming of Janet Jackme or Cherokee, knowing when the lights go down, they be running.  Oh, not you, right…Okay.  And definitely not you, I see you, Sis.  I’m not gonna tell people what they can and can not take.  I’m not there, but the number of responses to that Google query told me all I needed to know bout how SOME – not you, I get it – SOME women suffer in silence.  But I aint going…..nope.

Yall can have all the Safaree’s and Long Dick Dongs and Ol Boy from IState erybody know, but imma be over here with my insides firmly intact.

What so funny is that you know the last person that would wanna be fucked by Safaree?  Safaree.

In his interview with The Breakfast Club, he stated the most honest thing:

“I dont know what women feel, like, you know, during the feeling and sensaation of intercourse, but it looks like it hurts….having something go all the way into you.”

And then turned around and said the most scary thing:

“If I was to do that (post nudes), I woulda made sure I was erect.”

The nigga wasn’t even hard.

Jesus and my low cervix wept.