Real as a Three Dollar Bill

Growing up, I was a tv addict.  I think that I even wrote that about myself in the About Me section of this blog no one reads.  I watched every freaking thing. The Love Boat.  The Smurfs.  Dynasty on the phone with my friend Nile, which is why we call each other Fallon and Sable to this day.  Jenny Jones.  Morton Downey. Rickey Lake. Sally Jessy.  Donahue.  See where Im going?  At some point talk shows became my favorite. And aside from the “Geek to Chic”, “I was a one, now Im fun” makeovers and the paternity tests, two things were prominently featured: PSYCHICS and HYPNOTISTS.

Psychic would sit up and tell an audience member  “Mama, says the lotion is in the basket” and said person would burst into tears like “Only my mama, would know the lotion is in the basket!  Shando!”  And I would be sitting there in tears  with them like “Damn!  This shit is real! I wanna go on the show.” Then I would fall to my knees and pray I would meet this woman:

Then we have our Hypnotists.  They would tell a person they were getting sleepy and mofos appeared to be sleepy.  Then they would be made to bark like dog, hop on one leg and marry Prince Akeem.  And I would be like “Damn, this shit is real.  I wanna go on the show.”

So, when the opportunity presented itself….when the universe answers your prayers, you put on ya big girl panties, throw caution to the wind, and walk into your destiny.   My Fairy Godmother Adina, a segment producer at the gig, has made both of my dreams come true.  She has come to me twice  in the 2016th year of our Lord (is that right? I never know) and asked me if I want to be on our morning show.  Once to get a psychic reading, once to be hypnotized.  I’ve posted both of these videos on my Facebook page, and the response I got the most was “was it real?”  Seriously….if I had a dollar for every time someone asked that, I’d have a hot 50 bucks, cuz that’s how cracking my facebook be.  BE JEALOUS.

My Psychic Reading (Exhibit A):  Thomas John is a world renowned psychic, medium and clairvoyant. He’s also a published author and life coach….at least that’s what our website says.  About 7 of my co-workers and I filed onto the stage, with me being particularly careful and strategic about making sure I was standing right next to him (sorry kristin), so his focus would be on me.  Mission Accomplished.  He turns to me and says “Im sensing you lost a woman”  REAAAAAAAAAAAAAAAAAAAAAALLY?  Im sitting up with smile lines, hanging jowls, and gray hair and you really know I lost a woman in my life?  MAGIC!   “A grandmother, perhaps?”  WHAT WITCHCRAFT IS THIS?  HOW DO YOU KNOW THIS?  IS SHE HERE?  “You guys were very close. She lived with you right?”  UMMMMM, NANA LIVED IN DETROIT, BUT THATS KINDA CLOSE, JUST SMILE MYA, UR ON TV.  “She wants you to know, she is always with you.”  AWWW, THATS NICE, MAYBE NOT TRUE, BUT IM COOL WITH WALKING ROUND THINKING IT.  “She had breathing, issues, correct?”  NOT REALLY, NO.  “oh so maybe that’s you” he said to the girl next to me, before moving on to her.  He briefly returned to me to tell me a promotion or growth in my position was imminent.  AND WHO THE FUCK DOESNT WANT TO BELIEVE THAT?  Real Factor: 0.  Unless I get a promotion, which could be filed under a self fulfilling prophecy, which would bring the real factor to .5 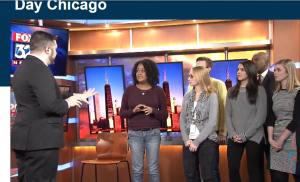 Watch for yourself right here: http://www.fox32chicago.com/mornings/70477628-story

That time I was hypnotized, or was I (O_0)? (Exhibit B): Colin Christopher was his name.  He was on the show to discuss a book he’d written about hypnotizing yourself  or something or dating or something.  I couldnt really be counted on to care, cuz I was too excited about the possibility of making a fool of myself on the local news.  Prior to the segment, we found a quiet place to conduct our session.  He explained to me the basics of hypnotism, and the varying times it could take a person to go under.  He worked on me for about 10 minutes prior to the show.  Telling me to imagine myself being enveloped by different colors, different temperatures. Honestly, after all that, I was a little groggy, but im not sure if thats cuz he was taking over my brain, or becuz it was 8am and my eyes had been closed alot.  So we go to the set.  The conversation turns to me.  He commands me, “SLEEP”.  PAUSE.  Now, at this moment, I have a choice.  Embarrass the hell out of this man, or play along.  Play along it is.  We went into the exercises of hotness, extreme hotness, which interesting enuff, I felt. He told me to imagine I was on a beach and it was hot as hell and the more I fanned myself, the hotter I got.  It got hot as hell on the set, but there are approximately 98578365783578326598327589273589 lights in the studio, so it coulda been that.  Then he told me to imagine I was cold…sitting on a block of ice cold…and to shiver..and the more I shivered the colder I got.  Now, at this point, I am still playing along.  He commanded me “UP”
or something and I came back like “what’d I miss? sike”  The host asked how I felt, blah blah blah, I cracked on his ass (SEE TIMELOG: 3:08 on the vidya), blah blah blah..and segment over.  We leave the studio and Colin sits me down and tells me he needs to bring be back down.  “BACK DOWN FAH WAHT”  I aint even go nowhere.  But he does some nanoo nanoo presto chango and Im back supposedly.  Now you can read all that, with the knowledge that I was pretending, cuz you just read it and its true, I was pretending.  HOWEVER, and this is my hand to God, on my nephews eyes, something happened to me in the midst of my fakery, I immediately contracted a cold.  The type of cold you would get if your body was violently snatched from one temperature, say extreme hotness to sitting on an ice block.  Swear, I have hacked up phlegm at least  40 times while typing this post.  And when I walked into that segment, I was perfectly healthy, I felt GREAT on a Monday morning and five minutes after that segment, I was fighting for my life.  I havent had a cold in two years and after 15 minutes with this man, telling me I was on a block of ice, I caught the plague.  Again, I dont believe in hypnotism per se, but I think those exercises have a lot to do with the power of suggestion – the brain can enable a mother to lift a car up off her baby, believe your man blocked ol girl from calling, fight off a bear, believe that light skinned baby got its color from your great great great great cousin and give you a cold. 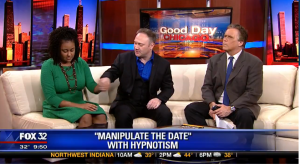