Fraud? Not the Quad. 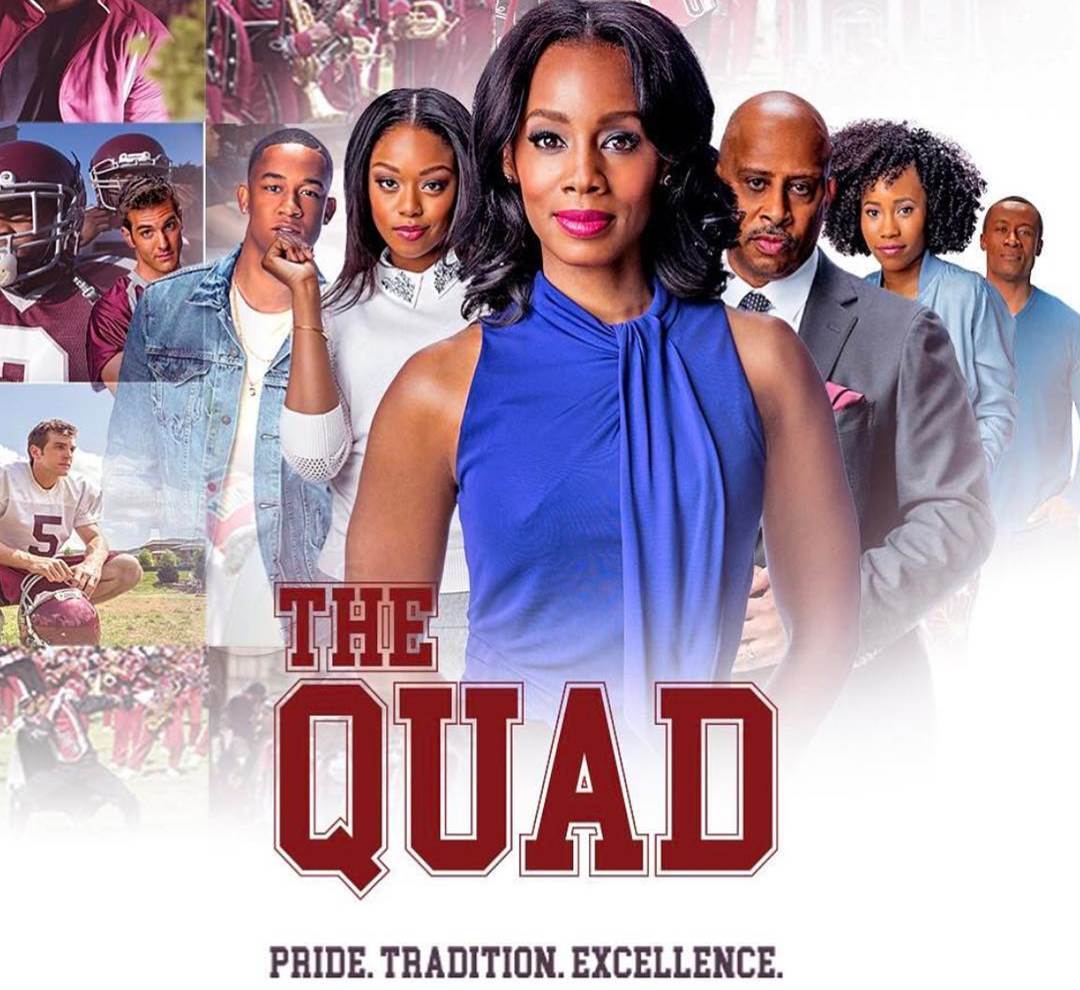 Have you ever settled in after a long day, your Pope wine glass/popcorn bowl in front of you, alpaca/llama/german shepard throw askew your body, glued to the tv to watch your favorite show – the one where the scrappy heroine walks to the train station, boards the train, hits up the starbucks, enters her workplace speaks to Bob and Mary Ann, has a great day, meets her boo for a hot dog stand lunch, and works on some Excel spreadsheets before hitting that same train headed back home, where she tears off her bra, and settles in to watch her favorite show where the scenario that I just described unfolds for her favorite scrappy heroine before her eyes?

No?  Me neither.  The scrappy heroine wouldn’t come home after her mundane day and watch another muthafucka have a mundane day either.  You know why?  Cuz that shit would be boring.  Who the hell wants to watch a television show about real life?  Especially a scripted one.  Even on reality shows, the producers ramp up the drama…now seems like an appropriate place for some edifyin and educatin;

drama: any situation or series of events having vivid, emotional, conflicting, or striking interest or results.  (from dictionary.com)

Anything vivid, emotional, conflicting or striking, or even interesting about our scrappy heroine’s day?

This is why these nonsense around BET’s new D-R-A-M-A The Quad perplexes me.  I’ve watched it since its premiere and its a soap opera set in a HBCU. Hazing, murders, affairs, departmental infighting, class warfare, drugs, and drinking  all figure prominently.  I attended an HBCU, two of them actually and with the exception of murder I can say definitively, all of these things happened during my matriculation at Hampton and or Clark.  Im pretty sure other attendees of HBCUs would agree with me, but one administrator at a very prominent HBCU is here for none of it.  Dr. William R. Harvey, president of my beloved “home by the sea” – Hampton University is bigly upset with Debra Lee and BET for what he feels is an unfair depiction of life at an HBCU, especially his special assed Hampton.  He is so upset in fact that he wrote a 3 page letter to detail his complaints.  I read his letter, which HILARIOUSLY opens with him thanking Jasmine Guy “for the one academic scene in The Quad series about the mythical and fictitious Georgia A&M University in which students are seated in a classroom.”  An actor getting credit for a scene that was written for her to appear in…fine.  I checked – Jas aint got shit to do with the creative end of this show, sooooooooooooooooooo, yeah.  He goes on to say that in his nearly 50 year esteemed career in higher education administration, he has NEVER witnessed the actions portrayed in The Quad.  Come with me on a cherry picking expedition of Dr. Harvey’s letter if you will….

He goes on to say that the show should have touched on the myriad accomplishments of Xavier, North Carolina A&T, Tougaloo and SHOCK, Hampton. He posits that if any of the things he’s never seen happen, happened on any of those campuses, none of those schools could have accomplished anything they accomplished.

He closes the letter by saying that we “cannot afford this kind of story telling.  It amounts to the type of fake news that is prevalent today.”

Sir….I know Porangetus has blurred the lines between “story” and “news” but you can’t compare the two.  One is a STORY and one is the NEWS.  What a false equivalency.  Stunning in its irresponsibility.

I’m unclear about exactly what it is about our cousins that only want the not only positive, but righteous side of us shown in movies and television dramas.  I mean I get it….but this aint blaxpoitation here.  There are no pimps hanging on campus ready to set out the fresh faced freshman.  No one is eating chicken and watermelon while bagging up their weed.  People are living, loving, succeeding and failing just like they do on college campuses and life in general…these people just happen to be black.

This is such made up bullshit, its a shame.  I feel quite comfortable in saying that not one kid watching The Quad is gonna clutch their pearls and decide to attend a PWI over an HBCU because a girl got drunk at a college party and ended up kissing a girl.  If anything, in this day and age, I imagine it would have the opposite effect. 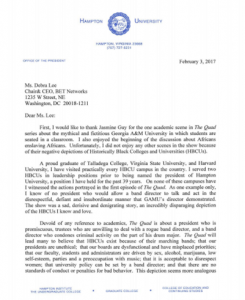 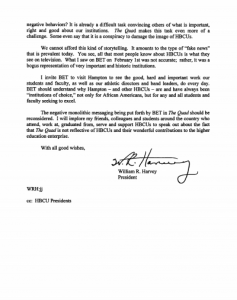