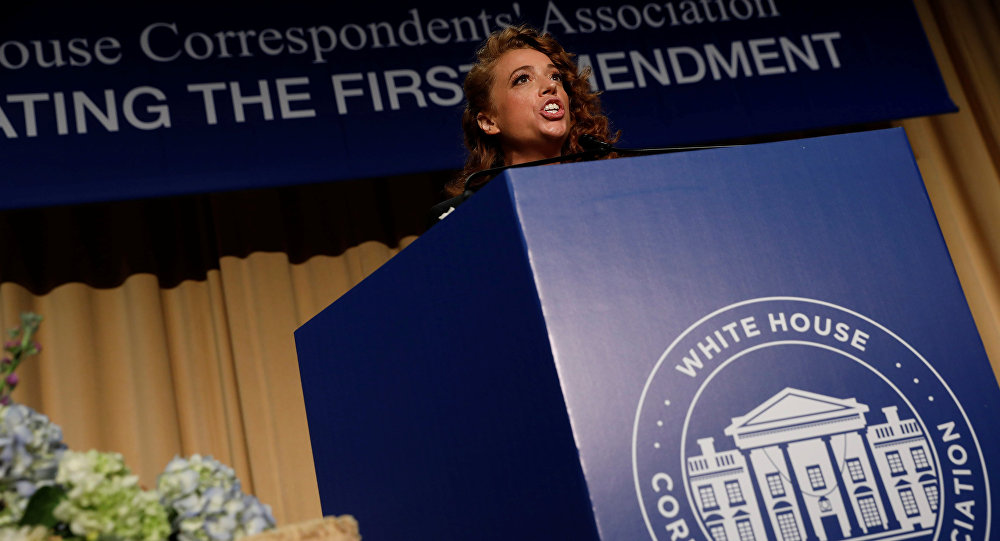 Cuz clearly you fools skim thru current events and politics without listening to it.

Im literally confused.  I dont know where to start.  All the capin over diaperbooty’s baby favah’s white is rightdom.  All the black people that want a rapist to be free cuz he looks like them or cuz some white man did something similar.  And all the “but what did she do” over God’s son’s alleged crimes, all this shit has left me at a loss.  And Im not gonna even delve into the Tullamore Dew inspired barbershop talk I had to endure over the weekend, cuz offended, underinformed black men offa whiskey……whew lawd.  Anyway…..I thought at the end of that particular fiasco, I would at least be able to go home and catch the White House Correspondents Dinner (WHCD) and get some laughs.  And I was right…a woman was in charge of the roasting and she did not disappoint.  I thought she was funny. She made me chuckle a couple of times.  Turned the shit off.  Thought nothing more about it.  Went to sleep and woke up firmly in Trumperica, a worse, more vile, more white, more outraged,  more politically incorrect -when it comes to “minorities” ONLY – version of our normal shit hole, where black folks in Flint and Chicago are drinking poisoned water, America.

Now because I pay attention to life, I KNOW there was nothing out of pocket or wrong about Michelle Wolf’s routine.  Men have been pulling zero punches at this event FOR YEARS.  One would even argue the last president to attend and speak at the WHCD, got us our current orange inflamed boil on the ass of EARF assed president, with his pointed remarks, which you can learn about here, cuz your outrage clues me in to the fact that you didn’t know Barack Obama was talking cash money shit about a lot of people in that room in 2011.

From what I can glean thru your bared teeth, all this outrage – how many time have I typed that word in this piece – is centered around one of the least sympathetic figures in the whole administration – Sarah Huckabee Sanders, and I want all the points allotted for not making a pun out of her name, as I am wont to do.  This horrid heap of malicious prevarications doesnt deserve respect, deference or even slight consideration of her feelings when she wakes up every day working for a country, cuz thats who they both work for, that she lies to without hesitation. Im struggling hard to see what Wolf said that was so terrible.  That she’s a liar?  WELL SHE IS and she seems pretty comfortable with it.  Who are me to judge?  That she spins those lies into ash to create the perfect smokey eye?  Who the fuck is she?  Hagrid or Dumbldeedworhwwoeof or whoever? Calm down people, her face notwithstanding, she is not a witch.  It is impossible to change lies into eyeshadow.  That she is a disappointment to white women?  Judging from how they turned out for her bossman, thats a hard sell but hey, even a broken clock is correct twice a day.   Knowing a COMEDIAN delivered all these lines makes it all the more jarring that folks are so upset bout her words.

Larry Wilmore literally got on stage and called Barack a nigga.

Hasan Minaj literally got on stage and called Steve Bannon a nazi.

Stephen Colbert literally got on stage and said Bush did nothing but stage “Mission Accomplished” photo ops.

Seth Meyers literally got on stage and said it looks like Dump wears a fox on his head; and compared him to a rusty bird cage; and said he sounds poor; and he would be a joke of a candidate.  He also said that if Barack’s hair got any whiter, the Tea Party would endorse it.

These men got on stage and said all of what I’ve cited above and worse.  Yet this fellow comedian cracks a joke about eyeshadow and suddenly the world is adrift.  An administration that has mocked and showed disdain to and for: blacks, poor people, the disabled, mexicans, women, immigrants, Africa, muslims, soldiers, the FBI, hostile foreign agents and his own dumb ass supporters, who he said could watch him shoot someone and still elect him, are suddenly bastions of virtue and are not to be mocked, even though they mock us every, and I do mean every, day with those farces of press briefings and the positioning the media as the true enemy of the state.

I wonder what the difference is between Michelle and Larry, Hasan, Stephen and Seth? Just joking…..ITS HER VAGINA.  HER TITS.  HER ABILITY TO THINK AND CRITIQUE EVEN THOUGH SHE HAS A VAGINA AND TITS.  Women are so widely reviled, even by their own that there was no way that this woman was just up there continuing a tradition set forth by her brethren in comedy, who I pray are supporting her this morning.  She had to be doing something way more nefarious, more sinister, more wrong.

My love for Shelly from the Southside notwithstanding, this whole we go high thing is some straight up fuckshit.  It allowed the Obamas to look relatively unscathed in the insurmountable herculean challenges they faced on the daily.  The rest of us are free to get our street brawl on and we should, just as Larry and Hasan and Stephen and Seth were allowed to do and Michelle should be allowed to do without all the sad dicks and the women that love them shrivelling up and heading into these innanet streets to riot.  I read a tweet this morning by Jelani Cobb, a fave, that said “civility will not save you,”  and it wont, cuz it hasnt.  Not ever in the history of the world has civility saved anyone.  You can get mad, but it got MLK a rock to the head, but it didn’t give your black ass civil rights, LBJ’s streetbrawling ass did.

While she was throwing her benign shots and you were fauxraged bout it two things were happening: