In Memoriam: The Truth 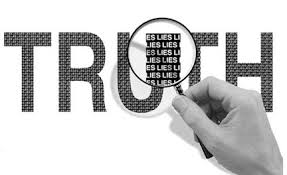 Y’all just don’t know how long I’ve been inspired to write this post.  Ever since Porangetus started his ascendancy to the now most barftastic office in all the land, more and more the truth has become an incidental set of circumstances.  As I type, it comes to mind that a couple of my exes actually taught me this with Porangetus becoming one of his ever present exclamation points on the thought.  He and his minions lied their way thru birtherism, the campaign, the election, the inauguration and now his presidency – the truth failed to matter the entire time.  They got on tv and said incredulous shit bout alternative facts and folks being too tired to not misspeak.  Some media outlets – WALL STREET JOURNAL – doubled down on this fuckshit, by refusing to call him a liar or the lying words coming out of his lying mouth, lies – as lying “ascribes a moral intent to the statements.”  Like this muthafucka got morals.  Anyway, I don’t wanna talk to much bout him…the depression I have over him is real and I’d like to not fall down that rabbit hole.

I’m here this post Oscar Sunday Monday because the ego to my id, Micaeh posted about the best picture debacle that occurred last night.  Now, I don’t really give a shit that this happened because:

But Micaeh posted something that really got at the heart of the subject of this piece.  And it had less to do with the movies involved, the debacle of the wrong winner or the show itself and everything to do with us.  Witness:

Almost everyone got this wrong.  And as I peruse social media today, Warren Beatty is getting dragged over the coals when WE ALL SAW FAYE DUNAWAY ANNOUNCE THE WINNER.  EACH AND EVERYONE OF US SAW HER SAY LA LA LAND OUT OF HER CONFUSED MOUTH.  Yet this is Warren’s fault .  Yet that video has been running non stop on every fucking news show on the W and K side of this country, people are STILL saying Warren announced the wrong winner.

This shit is maddening.

This is why Liz Claiborne/Tommy Hilfiger/Ya Grandma Sally will go down in history for saying that their designs ain’t for black folks.

This is why Hillary and her pals raping kids (they weren’t) in the back room of a D.C. pizza shop, led to a madman showing up with a gun to that pizza place ready to rescue children that weren’t even there.

This is why The Cos beat his case (he hasn’t) even though I JUST saw a story about how the case was staying in Philly to be tried instead of the Philly burbs.

This is why black people lost the right to vote (we didn’t) when the Voting Rights Act expired even though I just voted for The Bern and Hills.

This is why it’s now illegal (it’s not) for videotape police in Illinois.

This is why Porangetus can get on television and say he had the biglyest whatever the fuck and scores of ignorant racists believe him.

Y’all wont even try.  With the entirety of information in your grubby lil hands, you still wont take the time to google.  Its all there for you, and you wont even do it.

I work at a news organization as some of you may know.  Last week I got a note from a very concerned citizen of my fair Chicago, who wanted to know why we hadn’t covered a story.  Concerned citizen sent me a link to the story.  I assured concerned citizen that we had in fact covered it – a lot.  I was told we obviously didn’t cover it enough.

These are dangerous fucking times.  Do your research and get to the truth.  The truth matters. It absolutely does.