Its a Bird, Its a Plane, Its SUPER TUESDAY!

Editors Note:  I’ve had to edit this post as some horrid nosey people at my job have sadly discovered my blog.  And since I need to work, I’d rather edit, than have to defend my work, at least until I dont have to work.  Thanks.

NO?  Well, sit next to me and partake of this tall glass of Shut The Fuck Up and be quiet while I talk to the intelligent WOKE people.

As some of you know, I work for a local news operation, which shall not be named EVER on this blog and who does not share nor endorse my views. Stick a pin in that info as you will need it as you move forward in the sharing of my life.

3pm:  I arrive.  A hush falls over my co-workers as the most beautiful black woman they have ever seen with an 8 week old dandruff laden crochet job and incredibly gorgeous Jesus delivered brows and eyelashes enters the room.

3:15pm:  Nick’s ass walks up to me, doesnt say hello and asks if I know what time the pizza is arriving. I passively aggressively dismiss him in a way that has him apologizing to me for the rest of the night.  NOTE:  FOOD IS THE MOST IMPORTANT COMMODITY IN A NEWSROOM. Cameras go out? Cool.  Printers down, no worries.  Anchors on air drunk?  We can handle that!  Pizza’s gonna be late.  PACK IT UP!  We out this bitch.

4pm:  Surfing the web to see what idiots and geniuses are posting on The Book, which is where I live. So many ‘I voted’ receipts.  So many.  So many pontificators. So many.  So many political analysts that dont know that today is a primary day.  Nothing except electoral votes will be won.  Pretty sure as of this writing some of them think Donald Trump became president last night.

4:30pm – eternity:  meeting with <REDACTED>, who explains she wants me to log speeches along with updating poll numbers and put out various fires that may arise.  She took the time to explain what logging means, as I did not go to school for 12 years for a MASS MEDIA ARTS degree, apparently.  AND does my favorite thing, which is to explain a simple ass task, repeatedly using different words and phrases, to explain the same damn point.

5:00pm:  meeting with Web Producer who takes 3 minutes to explain a way more difficult task, with the assumption that we can read the notes and make it work.  ME LIKE WEB PRODUCER.  WEB PRODUCER SMART.  WEB PRODUCER THINK ME SMART.

5:15pm:  Nick is happy, as there is no longer a need to worry about when the food will arrive. 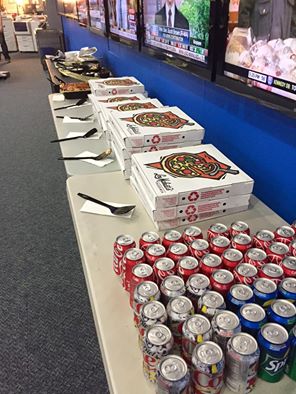 6:00pm:  The cesspool known as Florida aka My mothers birthplace aka Stand ya groundland (not linking to that bitch ass) aka Marissa Alexander’s captor aka Hanging Chad  Avenue aka the place that aint shit but rednecks cept the SoBe (shouts out to Cocaine Biceps), has closed the polls.  It was only about 1% in at the time, but it was already a fucking landslide.  Dude won and I believe Monica’s dip’s wife won as well.   Marco Rubio figured out what the rest of us knew from the start….his beginning was his end.  OUTTA THERE.  Campaign Suspended.  (suspended…thats cute) The numbers provided by the Associated Press (AP), which we were using to supply our viewers with info, were rapidly changing. So much so, it was hard to constantly update.  Me and my compadre in arms, Nora, looked alot like this:

The rest of the states slowly trickled in.  Missouri, Ohio, That place, That other place, The place over there, that spot and home sweet home, Illinois, which lets be honest is all I really gave a fuck about and one race in particular.

7:45 Polls been closed for about an hour at this point, except for Kendall County, which predictably ran out of Democratic Ballots.  PAUSE:  while we are at this point in the story, why are separate ballots needed?  Just list all that shit on one page, trust that I can read and comprehend simple things unlike my <REDACTED> believes and lets stop killing extra trees, K? UNPAUSE.  Our political editor started screaming so loudly that the walls shook.  He was raving about how The Bern got a court order to keep the polls open an extra hour due to the fuckery!!!!!!  I thought we were going to perform CPR on him if he yelled ONE more time.

8:00pm The race being watched round the world or at least Cook County Illinois:  The Foxx vs Ol Girl.  At first look, I almost started footworking, which is amazing, cuz I dont dance and Im old, cuz in the race for Cook County States Attorney, Kim Foxx, the (Black) peoples champ was doing to Ol Girl what The Gimp did to Ving Rhames.  GLORY!!!! But wait, inexplicably, her numbers are dropping.  WHAT IN THE ENTIRE EFF?  The phones started ringing off the hook.  SOMEONE GET AP (thats associated press incase your reefah addled brain doesnt remember that from earlier in the post) on the phone!!! AP gets on the phone and tells us something is screwy and to sit tight.

8:15pm:  More pizza.  Another Pop.  Bathrooom break.  Give manfriend the silent treatment, while being on the phone with him, then refuse a ride home. (will it ever end?)

8:20pm:  Someone yells, Mya!  Will you log Donald Trumps speech?  He’s on!  WAIT JUST A GOT DAMN MINUTE.   First you tell me to be at work at 7a to field produce the Barbershop cast surprising the kids at urban prep, then tell me you dont need me when I coulda stayed sleep.  Next train going home wasnt til an hour later, so I gotta sit here til then.  Leave. Come back.  Have Nick run up on me bout Pizza.  Have AND explain the same concept twenty times.  Watch Florida vote for an idiot.  Eyes bleed from rapidly updating numbers.  Experience the roller coaster of Kim Foxx winning then appearing to lose. Have the fucking AP go nuts.  Diss manfriend and NOW you want me to do what?  I titled that fucking log: “The MOST HORRIBLE JOB OF THE NIGHT FOR WHICH MYA COURTNEY SEALS SHOULD EARN HAZARD PAY AND A DAY OFF or donalds speech”  Fine.

9:00pm: a Facebook live video is shot capturing me in all my glory.  I cant find it anymore.  Sorry folks.  I know you were wet with anticipation at the thought of seeing it.   Also at this time our live coverage begins. We did a kick ass job.  Lil audio issues at the start, but our coverage was far and away the best.  I cant tell you what station, but if you really wanted to know, you could figure it out.

9:30pm: AP is reporting.  Drumpf won Ill.  Hills and Bern in a dead heat and Anita Alvarez will not have another term to ruin black and brown families.

10:00pm:  someone asks my compadre Nora if they need a ride home and I take that as my cue to leave and our night is over.

10:20pm: Im sitting on the Metra, dead ass tired, having to listen to some fuckin black ass idiot listen to his trap ass music aloud, and for a moment, miss the thought of Anita locking up black people.